Sounds like a good reason to go to a Quilt Show!

If you’re in the Western Washington State area this weekend, be sure to visit the annual Quilters Anonymous Quilt Show. It starts today (Friday) and runs through Sunday, at the Evergreen State Fairgrounds in Monroe.

I joined this fabulous quilt guild last year — it is full of friendly, generous, and very talented quilters. I’ve had the fun time of helping to set up at the show the last two days. It sure is a lot of work, but the final result is definitely worth it — I’m so impressed and inspired by all the beautiful quilts!

Come check it out!

This table runner was a gift for my sister Rona and brother-in-law Todd, for their wedding in September.

The pattern for the flower design is from “Mountain Blossoms” by Cindy Blackberg, which was in the April 2008 issue of American Patchwork & Quilting (as a larger square table topper made up of nine blossoms).

The blossoms were hand-pieced and hand-appliqued onto the background. The swirly vines and berries were hand-embroidered, and the final piece was hand-quilted.

This was my first try at hand-piecing and once I got the hang of it, it was very satisfying. It was fun to do all of this project by hand — a special project for a very special occasion!

(There is one part that wasn’t hand-done: the binding was machine-sewn to the front of the piece, then folded over and hand-stiched to the back.)

The fabrics for the blossoms were chosen by Rona for the cute bird duo my Mom made for the top of the wedding cake — so I was working with colors I knew she liked. And I could surprise them by sneakily using the same fabrics! 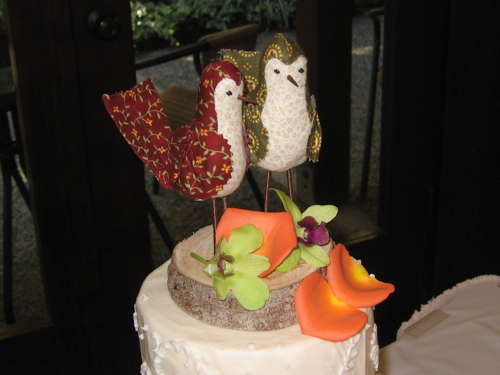 I didn’t pre-measure, knowing the approximate size of their coffee table, but as luck would have it, it’s also just the right size for their entry-way side table. Cheers to the happy couple!

My sister Rona got married in September and we held a bridal shower for her early in the month. For party favors, my Mom, sister Kaye and I made lavender sachets.

We used linen (recycled from a shirt too worn in places for wearing) and embroidered flowers or fun geometric shapes on them, adding a few little beads for extra texture. After filling them with lavender, we sewed the tops closed and folded down the fabric to make envelope-style closures on the backs — secured with cute little buttons (not shown in the photo). The final touch was a tag on each that Kaye made, noting the year and names of the happy couple, Rona and Todd!

It was so much fun picking out the embroidery patterns. Some were from my grandmother’s collection of vintage patterns, and some were from Sublime Stitching’s Flower Power and Swanky Decor sets that I received as a Christmas gift in 2007.

Each sachet was unique, so each guest at the shower could pick out her favorite!

With the beginning of a new year, it’s time for a recap of last year’s projects!

2008 started out with a quilt for Mikey (my cousin-in-law’s son), who turned 8 years old in August. Since Mikey was born before I was sewing blankets and quilts for new babies of friends and family, he was over-due for his quilt.

The first step was to choose the pattern — something fun that a boy would like. I went with the traditional Friendship Star. Then there was choosing the fabric. The fabric most definitely could not be girly (no flowers, no kitties, nothing cute). I found a blue print with a cool outer-space vibe, and the same print in green that has kind of a lizard-y effect. I ran my fabric selections past someone who was an 8-year-old boy at one time (a little while back) (thanks, Brent!).

This was a fun and easy block pattern to sew. It’s all squares except for the half-square triangles that form the points of the stars.

The next big step was the quilting. This was my first all-hand-quilted project so it took a while. It was nice to see that it became easier, and I became faster at it, and by the time I finished I actually was enjoying it! Nice to advance to that, past the determined I can do this! mind-set of the beginner.

The blocks containing the stars were quilted around the outside of each star, and the other squares were quilted with an X from corner to corner (for an overall diagonal pattern). 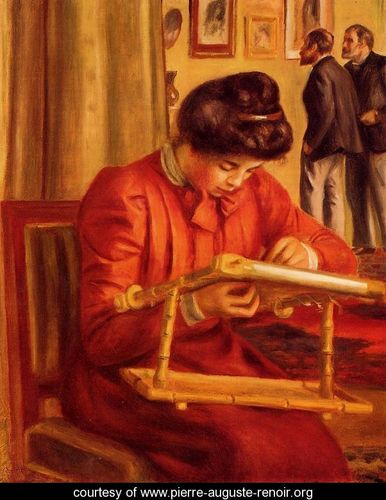 I saw this painting last month at the Seattle Art Museum’s Impressionists exhibit.

What am I sewing? It’s a surprise! More details and photos soon…